Peterloo charts events leading up to the infamous Peterloo Massacre of 1819 where British government forces charged a peaceful protest of more than 60,000 people at St Peter’s Field in Manchester, causing death and injury.

Henry Woolley worked with Leigh as supervising location manager on Peterloo, building on a working relationship with the director that has included sorting locations for Mr Turner, Another Year, Vera Drake and All or Nothing.

“We started scouting locations for Peterloo in January and began a 15-week shoot in around May,” Woolley tells The Knowledge. 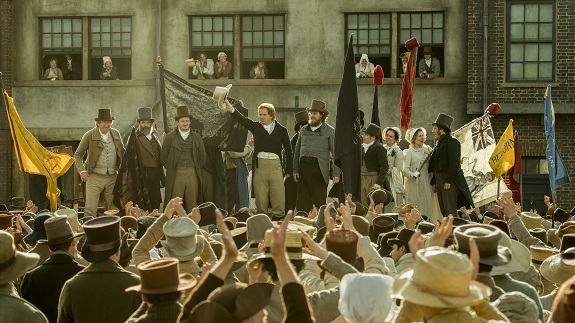 Staging of the massacre itself took place at Tilbury Fort, an historic structure built in the 16th century by Henry VIII.

“Tilbury offered a controlled space for the five weeks we needed to shoot the massacre,” says Woolley. “It’s very tricky to get that level of control and we also needed a significant set build.”

Scenes depicting early-19th century Manchester were filmed in the historic streets of Lincoln in the East Midlands, and in Chester.

As is usually the case on a Mike Leigh production, the script was developed as the team went along, meaning a lot of flexibility was required with location selections, as with every other department.

“We worked with the city council in Lincoln,” says Woolley. “They pointed us to some of the period streets and squares.