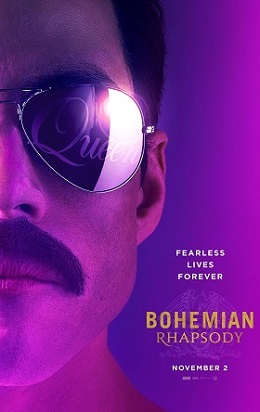 The movie was planned from the beginning as a location-centric production that would shoot in and around London. Queen’s iconic appearance at Live Aid at Wembley Stadium in the summer of 1985 is a key part of the story.

Shooting at the real Wembley Stadium was never a practical option.

The production team needed two weeks to shoot the relevant scenes and then there was the visual issue that Wembley's iconic twin towers were demolished in 2003 when the site was rebuilt.

“We had several weeks of stage building to achieve and had decided to place all our Wembley action in one location,” says Camilla Stephenson, supervising location manager on Bohemian Rhapsody, in comments to The Knowledge.

“For these reasons we knew that the current Wembley stadium was not right for us and not feasible in terms of the amount of time we needed for the shoot.”

Bovingdon Airfield north-west of London was eventually chosen as a suitable site to build the Wembley set.

The airfield offers a half-mile-long concrete runway and was already established as a practical filming location, having hosted scenes for productions like superhero movie Justice League and the Harry Potter franchise.

“We searched every bit of ‘hard standing’ big enough for our exact-replica stage and for a large set to its rear and all the infrastructure that was required for the build and shoot,” says Stephenson. “It also had to be as close to London as possible so as not to create overnights for the shooting crew or many hundreds of extras.”

An 18-foot-high set of the Wembley stage as it appeared during Live Aid was constructed for the shoot, and the production team also built the venue’s surrounding scaffold complete with posters and banners that were three storeys high.

The full height of the set in fact necessitated a build further up the Bovingdon runway than usual so as to avoid interfering with an air traffic control beacon for Heathrow Airport.

West London’s Gillette building was used to host various interior sets for the story, including Freddie Mercury’s childhood home in Zanzibar, a hotel in Brazil and a selection of recording studios.

London remains one of the world’s busiest production hubs and makes a range of ‘alternative studio spaces’ available to producers when purpose-built studios are unavailable.