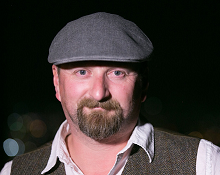 Director Neil Marshall (pictured) is setting up his next film, The Reckoning, to shoot in Wales in early 2019.

The horror feature is set against the backdrop of the witch hunts and great plague of 1665 and centres on a young widow who is falsely accused of being a witch while haunted by her husband’s suicide.

The film will star Charlotte Kirk, who also co-wrote the screenplay alongside Marshall and Edward Evers-Swindell. As first reported on Deadline, Kirk is also among the executive producers.

The film has been greenlit by MoviePass Films – the company’s Randall Emmett, George Furla and Ted Farnsworth will produce alongside Marshall, Jonas Babics, Yu-Fai Suen, Amelie Leroy and Ted Fox.

Marshall is best-known to date for his features Dog Soldiers and The Descent and was at the helm of Hellboy, Lionsgate’s reboot of the superhero franchise adapted from the Dark Horse Comics character of the same name. Hellboy filmed largely in Bulgaria last year with a brief stint in Bristol.

Marshall has also recently been involved with the TV series Lost in Space – he was one of the executive producers on the show and also directed two episodes.