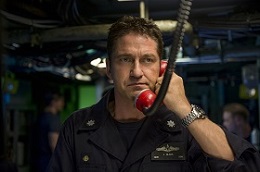 Filming too place at three separate studios in and around London for submarine thriller Hunter Killer.

The story follows Gerard Butler’s submarine commander as he attempts to rescue the president of Russia when the leader is kidnapped by a rogue Russian general.

Sets of the interior of a Virginia-class Hunter Killer submarine were built at Ealing Studios, using blueprints approved by the US Navy, with the spaces expanded slightly to allow freer camera movement. The sets were mounted on a gimbal to simulate the movement of the sea.

“In our agreement with the US Navy we actually pledged that everything about the sub would be authentic,” says John Thompson, one of the movie’s producers.

“They were gracious enough to let us reveal this submarine for the first time ever, so [production designer] Jon Henson spent a couple of weeks with Navy designers and engineers and came back with the most extraordinary details, right down to the colour of the cables.

“The US Navy also provided someone to guide and aid Jon and his team through the build. We wanted it to be so accurate that if someone who’d served on a real Virginia-class sub came to the set, they would recognise it immediately.”

Ealing also hosted a Pentagon set from where US military personnel track the submarine action.

A Bulgarian naval base in the city of Varna on the Black Sea coast doubled for exterior shots of Russia’s Polyarny base that in real life is a closed-off facility.

Interiors of the Russian base were built as sets at Nu Boyana Film Studios in Bulgarian capital Sofia. Nu Boyana has also recently hosted a new version of Hellboy and is currently home to Sylvester Stallone’s action sequel Rambo 5.