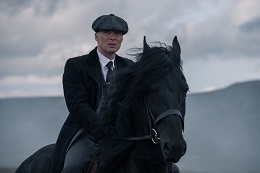 Mercian Studios is set to offer six stages across a 20-acre site near Birmingham’s airport, one of which will be a ‘shiny floor’ space designed for TV entertainment shows.

There will also be an assortment of workshop resources and post-production facilities.

“There’s a hole in the middle of the country in terms of media production, so I thought, why not build a studio there?” Knight told Broadcast. “I have a very clear vision of what it should be and what it should look like.

“I’ve had two years of meetings with the mayor, city councils and property developers, and I am trying to make the whole thing as ethical as possible. As a writer, it’s providing some good material.”

Knight is keen to fund Mercian Studios through private sources and plans to finalise deals by the end of the year. He also wants the development to benefit the local community as much as possible. The studios will be environmentally-friendly and will have publicly-accessible areas to help stimulate the local economy.

The writer and director is best known for creating the BBC’s hit period gangster show Peaky Blinders (pictured), which is set and filmed in the Birmingham area and is currently filming its fifth season.