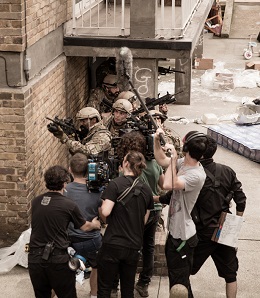 London locations feature in British zombie movie Redcon-1, though some of the more central story settings in the capital were in fact found outside the city.

Directed by Chee Keong Cheung, the story is set in the immediate aftermath of a zombie apocalypse that has decimated the UK and follows a squad of soldiers who are sent to find an individual who may have the cure to the virus.

Production took place with the support of FilmFixer and Screen Suffolk.

“The movie looks like it cost so much more to make than it really did,” says Ioanna Karavela, the film’s producer. “There were lots of tips and tricks that we have to thank FilmFixer for.

“We would start very early in the morning, at dawn pretty much, to shoot iconic locations like Potters Fields Park and Butlers Wharf along the Thames at Bankside, and the Albert Embankment overlooking the Houses of Parliament.

“We took a tiny crew and had the cast all made up and ready to go. This meant we could film very quickly without disturbing anyone or needing to organise loads of parking.

“With just three crew, we also filmed lots of general views around London, and then cut them into scenes filmed elsewhere, so the movie gives the impression that a big cast shot complicated scenes in the capital.”

Boat scenes set at Bankside in the centre of the city were in fact shot outside London, but the production team did shoot at an estate in Southwark. Old Town Hall in Bromley provided flexible spaces for a range of interior settings, including a prison cell, a shop and a military headquarters.

“We helped the production with 10 key film days between August 2016 and April 2017,” says Karen Everett, CEO of FilmFixer.

“It's to their credit that the production managed to get such a complicated film shot on its tiny budget. We would emphasise that this type of filming was possible thanks to the production’s absolute respect for our guidance.”