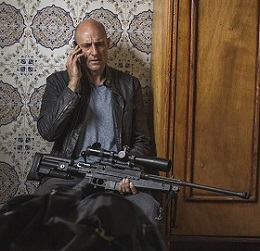 Walton Goggins stars in the second run, playing a former CIA agent who works in sub-Saharan Africa as a 'fixer'.

He operates for the so-called ‘deep state’ that comprises global powers seeking to profit from political instability around the world.

Goggins takes over the lead from Mark Strong, who starred in the first series as a former MI6 agent dragged back into the field (pictured).

The series is co-created, directed and written by Matthew Parkhill and is produced by London-based company Endor Productions for Fox Network Group Europe & Africa.

The network is also working on a new TV adaptation of HG Wells’ sci-fi story The War of the Worlds.

Recent productions to have shot in South Africa have included British historical dramas Tutankhamun, Troy: Fall of a City and the 1960s-set The Last Post, as well as the major studio movie Tomb Raider.