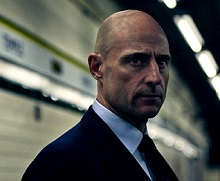 Principal photography begins in London on 3 September on Temple, an English-language adaptation of the critically-acclaimed Norwegian drama Valkyrien.

Playwright Mark O’Rowe (Boy A) has written the series that comes from Liza Marshall’s Hera Pictures for delivery to Sky One.

Mark Strong plays Daniel, a surgeon who, driven by personal tragedy, sets up an illegal clinic in a disused network of tunnels beneath the streets of London. Carice van Houten and Daniel Mays co-star.

“Mark O’Rowe has created a complex and multi-faceted character in Daniel - a man pushed to the extreme as his world is radically destabilised. Temple is a gripping and humane morality tale for our time”, said Strong.

For more on the key production personnel involved in the five-month shoot, log into Production Intelligence, where the project was first listed in March.

Temple is one of several scripted projects from UK companies that begin filming next week; others include Catherine The Great with Helen Mirren, Line of Duty 5 and Billie Piper’s directorial feature debut Rare Beasts.