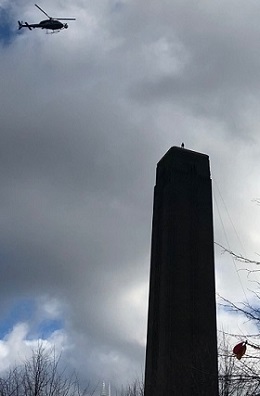 London was the base for their previous Mission: Impossible movie Rogue Nation and for Fallout they returned to Warner Bros. Studios Leavesden.

Locations in Bishopsgate and Shoreditch stood in for separate story settings in European cities including Berlin, while the city’s more iconic central locales were used for scenes set in the capital for a key midpoint foot chase.

Cruise’s superspy Ethan Hunt finds himself having to climb to the city’s rooftops and he crosses the Thames by sprinting across the distinctive solar roof of Blackfriars railway station on the north bank.

He then follows a mark at ground level along Bankside towards a showdown on the 99-metre-high chimney of the Tate Modern.

The Tate’s filming manager Chris Webster worked with Paramount Pictures to organise the first ever shoot on the top of the gallery’s chimney.

“All in all it took about a year from the first initial scouting to actually shooting the scenes,” Webster tells The Knowledge.

“There were various ideas and discussions in the early stages about what could be achieved and how this might work.”

A temporary scaffold was set up by the production team towards the top of the chimney as a support structure for the crew that remained hidden when Cruise was filmed on the roof from a helicopter.

“The film crew employed specialist scaffold company Crown and they worked with the Tate Modern’s facilities and buildings team to manage the construction and maintenance of the chimney scaffold,” says Webster.

“Crown drilled anchor points into the chimney and tested the pull, then built the scaffold from these points – they made a platform near the top so that the crew could access the rooftop safely.”

FilmFixer manages the film office service for Southwark Council, the authority that supervises production in the area.

“This was a complicated shoot that required helicopter licenses from the Civil Aviation Authority, as well as permission from the Met Police for the characters to carry fake weapons,” says Karen Everett, CEO of FilmFixer, in comments to The Knowledge.

Physical production on the Tate chimney lasted a tight six days, including prep and clean-up. The shoot itself spanned about six hours on a single day.

In the film, Hunt gets to the top of the chimney by way of an internal industrial lift, which was shot at a separate location.

London remains one of the world’s most popular filming locations for big-budget Hollywood movies, recently drawing level with top US hub Georgia.

Moving at the speed of rigging. A supplier of rope and consumables, mostly to the Stunt, rigging, aerial lighting department and theatres. Our products range… more Call: 07388 205152   |   Add to Shortlist