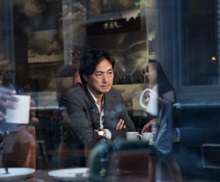 Giri/Haji (meaning Duty/Shame in Japanese) is from writer Joe Barton (Humans) and follows Kenzo, a middle-aged Tokyo detective who travels to London in search of his long-lost younger brother Yuto.

Once assumed dead, the wayward Yuto is now believed to be posing as a Yakuza gangster in London and is wanted for the murder of a Japanese businessman there.

The eight-episode drama is from Sister Pictures – Jane Featherstone, Chris Fry and author Barton executive produce for Sister alongside Piers Wenger for the BBC.

The lengthy shoot is split between London and Japan, and will be filmed in English and Japanese. Julian Farino directs.

Featherstone said of Giri/Haji: “Joe is an amazing talent and I am thrilled to be working with him at Sister on this series which plays with genre in such a sophisticated way.

“In Giri/Haji he has created gripping, truly rule-breaking scripts, visually and narratively rich, and when paired with this extraordinary ensemble cast and Julian's beautiful direction, they will, I believe, result in something pretty fabulous.”