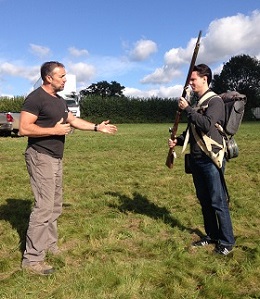 “Huzzah!” That’s what I’m told to shout when charging at 19th century infantry with a bayonet.

The location is a field near Reading on a warm and sunny October afternoon, and I’m learning how to launch an offensive against hostile French forces, 19th-century style.

In this instance the French are imaginary but the platoon of individuals around me dressed as Napoleonic-era soldiers are very real.

Mammoth Screen is producing ITV’s high-end adaptation of William Makepeace Thackeray’s Vanity Fair, which will include scenes set during the decisive Battle of Waterloo of 1815.

I’m getting a taster of the training undertaken to turn 200 ‘background artists’ into English soldiers of the era. I stand in their ranks for the drill session, kitted out in a small backpack, with a food bag and water canteen slung over my shoulder, along with a length of pointed steel that I assume at first is a sword, but is actually a long bayonet.

None of this period-authentic equipment seems to have much sense of practicality. It feels as though the military minds of the time drew up a list of what their soldiers would need and then elected to just hang it all over their men’s limbs wherever there seemed to be space. The result is a cumbersome mishmash of 19th century life support and weaponry. And then we prepare to charge the enemy.

As we shift into a slow march, I get shouted at for staring at the feet of the guy next to me as I try to keep time. We increase to a jog and then finally break into a sprint, rifles pointed forward. “Huzzah!” I’m caught off-guard by how intimidating it all sounds.

From there it’s on to manoeuvres, which are harder to master than you might think. Keeping in time with the guys next to you – ideally not by constantly staring at their feet – and then making sure your spacing is right and shifting the weight of the rifle in the correct way.

After a few marches around the field, the troops file into a large tent where they remove their military equipment and have some tea. 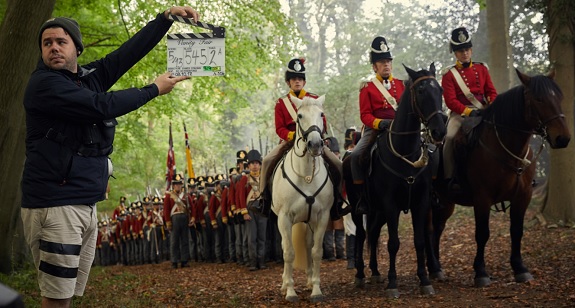 Paul Biddiss is a former soldier who has segued into a successful career as a military action advisor for film and TV. He explains that casting the background soldiers for Vanity Fair began with an open process that was staggered by a range of different age groups to ensure that soldiers of different ranks would be portrayed by actors of the right age.

Selected performers were given basic drill timings during their costume fittings and then told to go away and practise – “with a broom handle in their bedrooms” – before the next formal step in the process.

“When you have a body of men all doing the same thing and all acting like soldiers, I then teach them how to look after the guys in their section and how to put on their kit,” Biddiss tells KFTV. “I explain what the kit means – it’s a history lesson so that they understand the reason for that kit, which is where having military advisers and a boot camp really pays dividends to a production.

“These guys, on the day, come in, get their uniforms on, put their kit on by themselves, go to make-up and form up in their sections – then it’s ‘Where do you want them, director?’

“What I tend to do is train the guys in certain formations as an added bonus so the director’s got some choices. 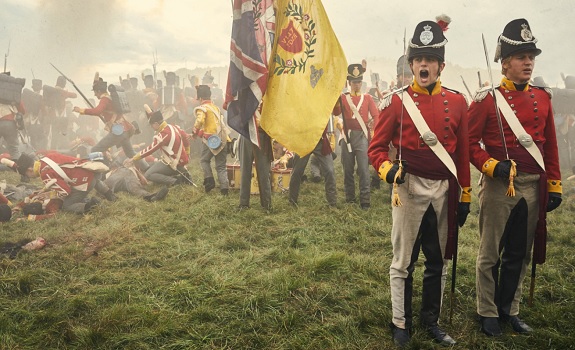 Biddiss finds that sometimes the individuals who apply for these kinds of historical productions have either served in the military or enjoy performing as weekend re-enactors. However, he says it’s sometimes better for training and filming purposes if he has the human equivalent of a blank canvas to work with.

He also advised Vanity Fair’s producers on the location selection. He used his technical knowledge of the actual field of battle that Wellington’s army faced back in 1815 and was inspired by a previous experience advising on David Ayer’s Second World War tank movie Fury, which filmed scenes in Shirburn in Oxfordshire in 2014.

“Originally we did look at Shirburn as we’d used that for Fury because it has a lot of rolling hills that are very similar to the reverse slope of Waterloo but there were a lot of potholes, which would have been a problem for stunts with horses.” 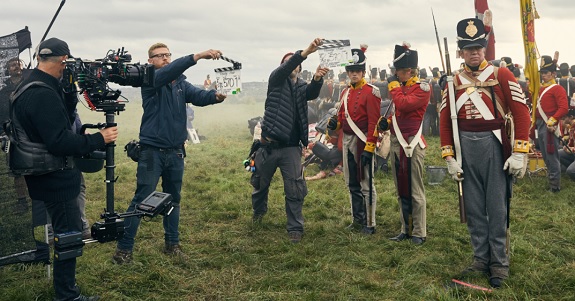 Later, the ‘troops’ get a briefing on the shoot from James Chambers, who it turns out is Vanity Fair’s ‘crowd second assistant director’. Chambers clarifies that some people will be chosen for period-appropriate facial hair make-up that he asks the men not to play with too much – false mutton chops are expensive to replace if damaged.

More crucially, Chambers clarifies that while Biddiss and his colleagues have been drilling the performers into the realities of being in Wellington’s army, they ultimately need to trust in the Vanity Fair crew to make creative decisions that work best for TV.

The actors are asked not to question the production team if they’re asked to perform in a way that’s not necessarily completely in line with their drill training. Biddiss and his team have provided the soldiers’ base training that’s rooted in historical accuracy, but ultimately that needs to be moulded around the demands of screen drama.

Biddiss’ training regime culminated in a week-long shoot to film the Battle of Waterloo, with the full team including 400 supporting artists and stunt performers, and 50 horses. Up to three separate units filmed each day to maximise coverage, and the team seem happy with the results.