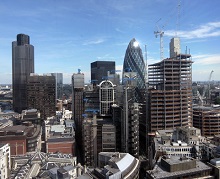 A major new 10-part drama, Devils, is in the pipeline with a 24-week shoot due to be underway in London and Rome in late September.

The project comes from Rome-based Lux Vide and Sky Italia, and is based on the best-seller of the same name by Guido Maria Brera.

A financial thriller, the drama is set in the London office of a major US bank and features an international cast including Patrick Dempsey, Alessandro Borghi, Laia Costa, Malachi Kirby and Paul Chowdhry.

British director Nick Hurran will act as showrunner and will direct the series along with Italian helmer Jan Michelini.

Luca Bernabei, CEO of Lux Vide, said: “Once finance had to do with some rich people who had the capital to ‘play’ on the stock exchange; now finance takes hold of the lives of all of us and changes them profoundly, making most of us poorer and a few privileged ones much richer.

“That’s exactly what struck me in the excellent novel by Guido Maria Brera, Devils, that tells the secrets of the new masters of the world: the lords of finance.”

Lux Vide is a well-established European production company and has produced more than 900 primetime hours of scripted TV. Its international credits include The Bible, Coco Chanel and Medici: Masters of Florence.