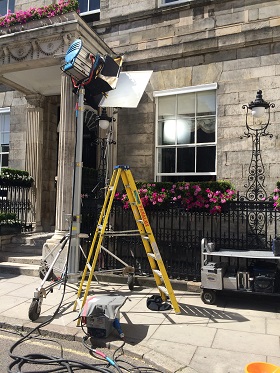 Acclaimed Italian crime drama Gomorrah filmed scenes in London recently for its fourth series. The Knowledge went on location to find out more.

Gomorrah follows the exploits of a crime family based in the Italian city of Naples.

Production on the London leg of the shoot has been underway for a week or so when The Knowledge visits the cast and crew on location at Chandos House (pictured).

The building is a former embassy and residence on Queen Anne Street in Marylebone that dates to the late 18th century and is now used for corporate hire and for special events.

Positioned minutes from the BBC’s Broadcasting House, Chandos House nonetheless feels secluded as a location, tucked away beside the Namibian High Commission and the Consulate General of Portugal.

The location is being used as the office of a businessman whom Genny meets with his lawyer as he’s pitched an investment opportunity. Over about 90 minutes, veteran Gomorrah director Francesca Comencini oversees three separate handheld angles on the meeting in a room dressed to look like an opulent corporate office.

Comencini (pictured below) later explains that the handheld camera is a specific stylistic choice.

“For Gomorrah we do not use the Steadicam but mainly the handheld camera that ‘breathes’ with our characters – with the exception of large, very geometric and wide shots that simulate our world in which the characters move,” she tells The Knowledge.

“We also use flight heads (a type of stabilised camera) that follow from behind and with a high camera point on cars when filming on the roads. Of course, all this is interpreted by every director with freedom and ductility depending on the narration.”

Gomorrah has never filmed in London before and Comencini and Esposito explain to The Knowledge that the show has a policy of shooting locations as themselves wherever possible. 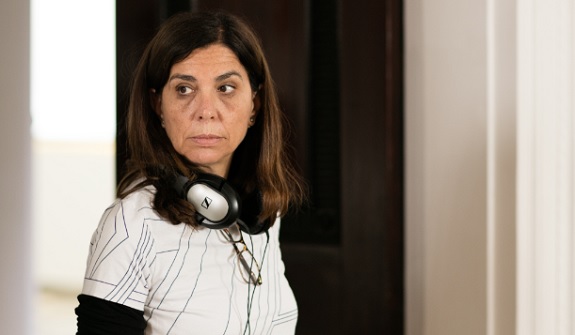 “Shooting in London, for me, is a challenge of course,” Comencini says. “It’s a centre of the financial world and it’s also a cultural centre – of cinema and music – but I was keen to avoid stereotypes. I hope we are able to capture something of this amazing place. London is huge and also has its own dark side.”

“London is like three Naples!” says Esposito. “In each series of Gomorrah we try to talk about criminal systems as they’re seen in places around the world, not just in Naples. Crime is about the corruption of financial systems.”

Location filming in London has a significant “ripple effect” on the capital’s economy, with £2.76 generated for every pound spent on production, according to a recent report for Film London.

Season Four of Gomorrah is scheduled to be screened next year.