Olga Kurylenko to film in the UK 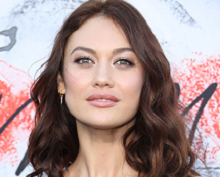 A new feature, The Bay of Silence, starring Olga Kurylenko, Claes Bang and Brian Cox is preparing to film in the UK and Italy.

The thriller is directed by Paula van der Oest about a man who undertakes a desperate search across Europe to find his missing family.

Caroline Goodall has written the screenplay, adapted from the novel by Lisa St Aubin de Teran.

Filming begins in Italy on 9 July before moving to Newcastle and London for a week and four weeks respectively.

The producers told Screen: “We are delighted to be working with Claes, Olga and Brian, who share the timeless appeal of great classic screen icons. Paula Van Der Oest is famed for bringing suspenseful character-driven stories to the screen, coupled with a rich visual aesthetic she achieves with her award-winning collaborators, cinematographer, Guido Gennep, and editor Sander Vos.

"We couldn’t ask for a better team to bring this powerful mystery thriller to the screen.”

Danish actor and musician Bang is best known to date for his role in Ruben Ostlund’s feature The Square – the film scooped the Palme d’Or at Cannes in 2017 – and will next appear in The Girl in the Spider’s Web.