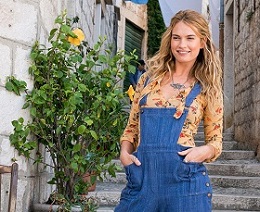 The movie is a sequel to 2008 musical hit Mamma Mia! and follows Amanda Seyfried’s mother-to-be Sophie as she learns about her mum’s adventures as a young woman.

Production for the first movie took place partly on the Greek island of Skopelos, but the sequel relocated proceedings to Vis, drawn in part by Croatia’s filming incentive support and the skilled local crew base.

“We started scouting in March and had Spanish and Croatian locations on the shortlist,” says Bill Darby, the movie’s supervising location manager, in comments to The Knowledge.

“The tech scout ended up happening towards the end of July and then we filmed for about five weeks from 11 September.”

Filming in fact began in the UK with selected interiors shot at Shepperton Studios before up to 150 key crew were flown out to Vis. They complemented a large contingent of local hires.

“We looked everywhere,” says Darby of the scouting process all along the Croatian coastline and its islands. “We decided that Vis was the island that looked the most like Greece. It is beautifully unspoiled but Croatia has more than a thousand islands and about 18,000 kilometres of coastline, and we looked at almost every inch.”

Local accommodation options were challenging but were eased by scheduling the shoot for the tail-end of the summer tourism season.

Greece launched its first formal filming incentive a few months after the Mamma Mia team wrapped on Vis and this support might have helped bring the shoot to one of the Greek islands if it had come a year or so earlier.

The islands off Croatia’s mainland are less commonly used as filming locations by international producers, although recent AMC TV drama The Terror used wilderness visuals on the island of Pag as doubles for the plains of the North-West Passage in Canada’s Artic.