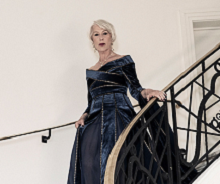 Helen Mirren is preparing to film her lead role in a major period drama about Catherine the Great that will film largely on location in Lithuania.

From New Pictures and Origin Pictures, the four-part mini-series is the third high-end drama collaboration from HBO and Sky under their new partnership deal, following the commission of Chernobyl – currently in production also mainly in Lithuania - and Gangs of London.

Shoot dates for the series, which is currently in pre-production, are listed on Production Intelligence along with key UK HoDs attached including the line producer, production designer, casting director and DoP.

It was Mirren’s idea that she play the iconic Russian monarch, as Thompson explained when the commission was first announced: “Helen Mirren came to me with the idea for Catherine the Great when we were working with her on Woman in Gold, saying it's a part she's always wanted to play.

"I’m delighted we’re now making the series and indeed we can't think of anyone better for the role.”