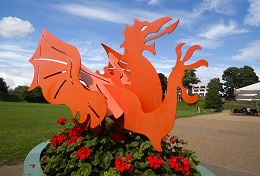 Fantasy story His Dark Materials has started filming in Wales as an ambitious TV adaptation.

The story is based on books by Philip Pullman and follows a young girl’s adventures across parallel universes as she searches for a missing friend and becomes caught up in a sinister conspiracy.

Tom Hooper will direct the initial eight-part series that has been adapted by star writer Jack Thorne.

Bad Wolf is making the ambitious drama for the BBC, in association with New Line Cinema, from a base at Wolf Studios Wales near Cardiff. The facility offers six sound stages and has already played host to Bad Wolf’s production A Discovery of Witches, which wrapped earlier this year.

“Wolf Studios Wales is set to be a world-class facility situated at the heart of a thriving creative and production community in Cardiff,” said Jane Tranter of Bad Wolf when the studio opened last spring.

“Wales has seen a resurgence in television and film production over recent years and studio space is much sought after.”