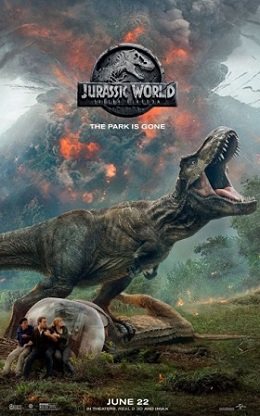 Adventure sequel Jurassic World: Fallen Kingdom used Pinewood Studios near London as its production base but also returned to film in Hawaii.

Fallen Kingdom follows on from Jurassic World and charts a mission to rescue dinosaurs from a volcanic eruption by moving them to a new specialist sanctuary.

Pinewood’s stages hosted a range of large-scale sets for the movie, including the interiors of a mansion owned by a wealthy entrepreneur in the story, and the vast spaces of a ship used to transport dinosaur cargo to safety.

Location filming also took place near Pinewood. A business centre in Slough near Heathrow Airport was used for office interior settings and selected exterior scenes were shot on nearby land run by the UK’s Ministry of Defence.

Pinewood Studios remains the UK’s flagship production facility and is in high demand. It is currently home to the Star Wars franchise, with JJ Abrams scheduled to start work on trilogy closer Episode IX in the coming months.

The Fallen Kingdom production team also filmed scenes on Oahu in Hawaii, using the island as a stand-in for the wild location from where the dinosaurs must be rescued. Every movie in the Jurassic Park franchise has filmed scenes in Hawaii since Steven Spielberg’s first film was released in 1993.

Sets for Fallen Kingdom were built at Kualoa Ranch, a private nature reserve near Honolulu that is long-established as a hugely popular filming location. Monster movie Kong: Skull Island has been one of the recent big-budget productions to use the ranch as one of its main filming locations – the film generated some $70m in regional economic activity for Hawaii.

Hawaii remains firmly in Hollywood’s spotlight. Action star and producer Dwayne Johnson shot Jumanji: Welcome to the Jungle on the islands with director Jake Kasdan and has returned to make Disney movie Jungle Cruise on the islands over the summer with filmmaker Jaume Collet-Serra.