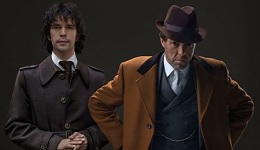 BBC drama A Very English Scandal filmed scenes at Manchester Town Hall, doubling the location for the Houses of Parliament as they appeared in the 1960s and 1970s.

Written by Russell T Davies and directed by Stephen Frears, the drama was produced by Blueprint Pictures.

The production stars Hugh Grant in the true story of Liberal Party leader Jeremy Thorpe and how he was put on trial in 1979 for the murder of his male former lover.

Screen Manchester worked with location manager Matt Winter to secure permission to film in the Town Hall, a Grade I listed building, over the course of three days.

“We are incredibly grateful to everyone at Screen Manchester and Manchester Town Hall for their support in making filming a possibility,” said producer Dan Winch.

“Manchester Town Hall bears such a resemblance to the Houses of Parliament that filming there gave us a brilliant opportunity to bring a scale and authenticity to our parliament scenes, which wouldn’t otherwise have been feasible.

Manchester Town Hall is established as a film-friendly location in the city, having previously hosted the BBC’s period gangster drama Peaky Blinders as well as Margaret Thatcher biopic The Iron Lady and adventure horror Victor Frankenstein.

A Very English Scandal was also filmed on location in London, including on the Albert Embankment in Lambeth.