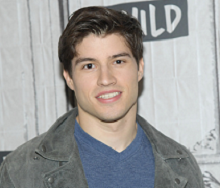 A second series of Krypton has been greenlit by Syfy with filming once again due to take place in Northern Ireland.

Warner Horizon Scripted Television makes the drama that is set two generations before the destruction of Superman’s home planet.

It follows Seg-El (Cameron Cuffe, pictured), Superman’s  grandfather, as a young man facing a life or death conflict – to save his home planet or allow its destruction to restore the fate of his future grandson.

The series will once again film at Belfast Harbour Studios, Northern Ireland’s newest production facility comprising two sound stages of around 36,000 sq ft each, which can be opened up to create a single filming space.

The first series of Krypton was the first production to use the studio when it began filming last autumn.

When the original series was announced, Richard Williams, CEO of Northern Ireland Screen, said of the news: “Securing Krypton is a real coup for us and cements our position as a world-class filming location with a local and highly-skilled crew base with vast experience.”

Krypton was Syfy’s most-watched debut season for any scripted series on the network since sci-fi western drama Defiance in 2015.

It is executive produced by David S Goyer through his company Phantom Four, alongside Cameron Welsh who is also showrunner.

Safety Happens BEHIND the Scenes " Providing high-quality set medics, using only UK registered healthcare professionals. * Where you need us - when you need… more Call: 0345 680 0168   |   Add to Shortlist

Bells and Two Tones pride themselves on being an authentic fire and rescue service that is run and owned by genuine time served firefighters, we… more Call: 01753 785658   |   Add to Shortlist