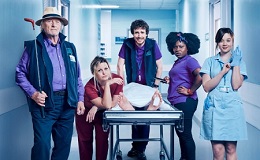 A full series of hospital-set comedy series Porters goes into pre-production this week for the Dave channel.

Dancing Ledge Productions is behind the show, which follows a young aspiring doctor as he tries to start his medical career by mastering the world of the porters in a hospital basement.

The show began life last year as a three-part pilot.

A full series was announced last month, written by Dan Sefton whose credits include the BBC’s medical drama Trust Me and ITV’s The Good Karma Hospital, a third season of which is currently in pre-production.

“It's really exciting to be able to confirm the return of Porters for a full series,” said Pete Thornton, senior commissioning editor at Dave’s parent company UKTV.

“The first three episodes set out the show's credentials as a highly original comic creation and we're very much looking forward to witnessing the cast's further adventures via the fertile imagination of one of the UK's most successful and prolific writers of recent years.”