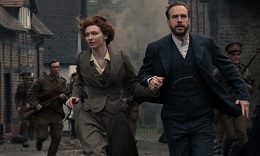 Production spending from international films and TV shows – or inward investment projects – continued to dominate the UK’s screen sectors in the first quarter of this year.

Overall production spending reached £386m, the second highest figure on record, with £40m of that total coming from UK shoots, according to new figures from the BFI.

Nonetheless, domestic features and TV shows in fact dominated in terms of the number of film projects and high-end TV shows that started shooting in the UK between the start of the year and the end of March.

Major international films moving into production in the first quarter included Kenneth Branagh’s adaptation of Artemis Fowl and Detective Pikachu, as well as The Voyage of Doctor Dolittle, headlined by Robert Downey Jr.

High-end TV productions included Little Drummer Girl and The War of the Worlds (pictured), as well as a new season of Black Mirror.

Stephen Poliakoff’s new UK period drama Summer of Rockets starts filming in London this week to tell a story set against the background of the UK’s first hydrogen bomb tests in the late 1950s. Next month, art forgery movie Lyrebird, which has Ridley Scott involved as a producer, is also scheduled to film scenes in the capital.

With 15 years' experience as specialist suppliers to the film and television industry we are in a unique position to offer a comprehensive range of… more Call: 020 8573 7717   |   Add to Shortlist