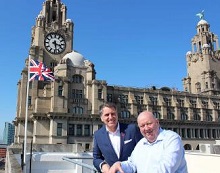 The city of Liverpool has officially thrown its hat into the ring as a contender for the relocation of Channel 4.

They hope that a move will transform the city’s creative and digital sector while breathing new energy into the broadcaster.

Liverpool’s profile as a film and TV-friendly city is well established and, with the conversion of the Littlewoods building into a film studio along with the development of a new creative quarter, looks set to rise.

Liverpool is one of the most filmed UK cities outside London - it was the first in Europe to establish a film office – with £90m of productions currently in the pipeline.

Channel 4’s search for a new location is called 4 All in the UK and the end result will see the broadcaster occupying three new creative hubs, the largest of which will be the new national HQ, to include a TV studio.

Mayor Anderson said: “Liverpool and Channel 4 are soulmates in so many ways - our attitude, spirit and creative output make us a perfect match. We also have a long, successful history together from the day it launched and the airing of the first episode of Brookside.

“The city and the station have undergone huge changes since that historic day and the timing has never been better for Liverpool to help Channel 4 write this new chapter in reshaping the nation’s broadcasting landscape.”