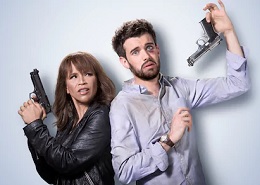 The show stars Whitehall as the hapless son of a middle-class British antiques dealer who becomes embroiled in international organised crime through an association with Perez’s bounty hunter.

Whitehall also co-writes the series with Freddy Syborn. Production Intelligence subscribers can log in now for details of the line producer and producer.

Bounty Hunters is a co-production from Tiger Aspect and Cave Bear.

Tiger Aspect continues to develop its relationship with Whitehall, having also worked together on an adaptation of Evelyn Waugh’s novel Decline and Fall, and on comedy travelogue Jack Whitehall’s Travels With My Father.

Tiger Aspect is also the company behind medical drama The Good Karma Hospital, which will film a third series this summer.