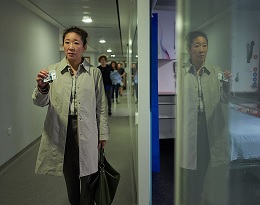 Guy’s Hospital in Southwark was used for scenes including a grisly multiple homicide as Villanelle eliminates an injured witness.

“Being a real hospital of course, Guy’s lends brilliant credibility, along with its central location, overlooking the Thames and the City,” says Karen Everett, director of FilmFixer, which manages film offices throughout London.

A funeral sequence and pub scenes were shot in Camden, while a key location in Haringey stood in for multiple story settings.

“The production moved into Old Hornsey Town Hall for three days,” says Everett. “It’s a fantastic space, used in the show as a hotel lobby, a restaurant, bar, hotel corridor and hotel bedroom.

“This series really packs a punch. Cast and crew ranged from 50 to 60, shooting in FilmFixer client boroughs between July and November last year.”

Killing Eve counts Fleabag star Phoebe Waller-Bridge among its team of executive producers. The show has already been commissioned for a second series and Production Intelligence subscribers can follow it now for continuing updates on key crew hires and filming dates.

UKTV has ordered another series of Sliced for its comedy channel Dave.

The Raynham Hangar Studios facility in Norfolk, which housed the 2017 shoot of Joanna Hogg’s The Souvenir, and Hogg’s The Souvenir Part 2 this year, has revealed a three-year expansion plan after securing £5m in private investment.

Dan Greenway Ltd is a small business supplying minicams and remote head cameras to production companies and outside broadcasts. We have all the latest mini… more Call: 020 8560 0856   |   Add to Shortlist