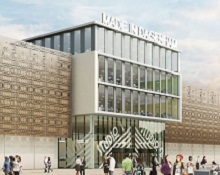 The preferred bidder for the construction and operation of a major new film studio in east London has been announced.

The announcement was made by Darren Rodwell, leader of Barking and Dagenham Council.

The council’s regeneration company, Be First, formally launched the competition to find a partner to run the studios in February this year, with subsequent interested parties reportedly including Pinewood Studios.

Film London and property consultant Lambert Smith Hampton acted as technical and commercial advisors to the £100m deal throughout the competition.

The 22-acre site will include 12 sound stages, workshops and warehouses for lighting and grip operations, 95,000 sq ft of production office space and an extensive post-production, visual effects and media technology complex.

Sadiq Khan, the mayor of London, said: “London is a global capital for film – with more than 40 film crews on our streets every day. I’m delighted that Pacifica Ventures has been announced as the preferred bidder – their exceptional track record will further cement the capital’s position as a world-leading film-making city.

“This development will bring hundreds of new jobs to the area – from carpenters to camera crew - and will bring big Hollywood blockbusters to Barking and Dagenham.”

Pacifica Ventures’ existing studio facilities around the world include Albuquerque Studios in New Mexico and Sun Center Studios in Pennsylvania.