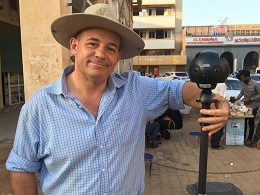 A Virtual Reality camera has been used by the BBC to film a news report investigating the political implications of the damming of the River Nile in Ethiopia.

The two-part report is entitled Damming the Nile VR and follows Alastair Leithead, the BBC’s Africa correspondent, as he takes a trip down the iconic river through Ethiopia, Sudan and Egypt .

Leithead and his team used an Insta360 Pro, a 1.2kg VR camera with six fisheye lenses that is usually mounted on a tripod.

The camera generates immersive VR with fully spatialised audio, meaning the audio changes depending where the user looks.

“Crucially, the trip was going to be happening anyway and it seemed like a good opportunity to help kick-start the BBC’s VR content with a journey down a scenic river,” says Leithead, in comments to The Knowledge.

“The locations offered beautiful views and millennia of history in a part of the world that’s difficult for many to access.”

Making use of VR impacted the style of the reporting itself. The camera was often placed in stationary positions in locations that were of significant visual interest for the report – such as at the site of the Grand Ethiopian Renaissance Dam itself – while Leithead opted to provide conversational voiceover to these shots.

Virtual Reality presents opportunities to blend local spectacle with journalistic narratives. Viewers can be immersed in the world of the story more effectively than through regular TV news reports.

A fuller sense of immersion makes the overall experience more personable – at one stage Leithead ‘offers’ the viewer a drink as he talks to a local journalist over lunch in a café with his crew.

“I wanted to make it more ‘pally’ and give viewers the space to take in the views,” says Leithead. “The viewer is included as a person and that gives the report more personality. You’re on the journey with the team and you’re in on the technique.”