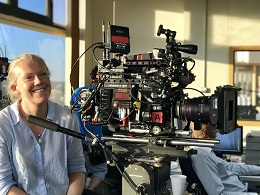 Crime drama Marcella filmed its second series on location in London for ITV and Netflix, and used a 4K camera to sustain the show’s foreboding visuals during a summer shoot.

“Shooting in 4K is a requirement for Netflix productions, which led to a shortlist of five cameras I wanted to test during prep, none of which I had any prior experience of, including the Sony F65 which Season One was shot on, as well as the VariCam35 and LT,” says Kate Reid, the show’s director of photography.

“I have to say I really liked the VariCam35. The compact size of it was one of the deciding factors (in comparison to the camera used in Season One) as we were shooting in physically small spaces, which would require the camera to be hand-held at times.

“After shooting some test footage and taking it into the grading suite to look at, it was really interesting to see how much we could pull back the highlights, which was reassuring as I knew that shooting in summer there was a good chance I would have to manage blown-out windows in certain locations where I didn't have much control over them, so this supported my decision to change the camera.”

Key scenes for the new series were filmed in Southwark, Lambeth, Camden and Islington, where the local film offices are managed by FilmFixer.

Flats in Lambeth were used as homes for characters in the show and an academy in the borough was used as a school setting by the production team.

Donations were made to several residents’ associations to thank them for accommodating production.