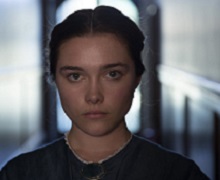 The low-budget film initiative for emerging UK talent is funded by the National Lottery via the BFI and supported by Creative Skillset and BBC Films.

Up to 12 projects will be selected, all of which will now benefit from the development Lab for the full duration of the programme, in addition to receiving dedicated support for their routes to market.

The iFeatures programme will back directors and writers making their first films, with the aim of fostering high- quality British debuts.

Changes to iFeatures’ Lab are intended to better meet the needs and ambitions of the key creative roles of director, producer and writer, and target a more representative range of filmmakers. The scheme will also adhere to the BFI’s recently-announced Diversity Targets, in place for all BFI-funded activity from April 2018.

Lady Macbeth star Florence Pugh said of the scheme: “Lady Macbeth was such a wonderful experience for us all. It can be a real challenge for rising talent to get the opportunity to make their first feature, which is why iFeatures is so important.

"It helps to ensure that British independent cinema continues to give exciting new voices a chance, and I think the decision to make it an annual lab can only help even more people to establish themselves.”

For further information on iFeatures and details on how to apply, click here.  for visit: