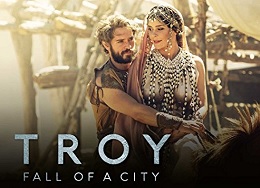 Historical drama Troy: Fall of a City filmed in Cape Town for the BBC, building expansive sets in and around the South African city.

Made by Kudos and Wild Mercury Productions, the eight-part drama tells the story of the Trojan War, based on Homer’s account of the ancient conflict.

“It was a production decision to film using Cape Town as a base,” says Peter Currey, the drama’s location manager, in comments to The Knowledge.

“The fact that Cape Town has a fairly long and diverse coastline was important as the story required several coastal scenes which needed to be completely different from others.”

Location scouting and set building lasted five months and then filming spanned half a year.

“Another key factor [in using Cape Town] was the existence of a large biblical city set which is based 30 kilometres from the city centre which, after some construction alterations, ended up being both the lower and upper city areas of Troy,” says Currey.

“This meant that the city did not have to be built from scratch. Other relevant factors were that within an hour’s drive from the city there are many natural location options which worked well for this production.”

Sets were also built in local studio facilities to provide weather cover as the shoot was partly scheduled for South Africa’s winter (May to October) when the country gets most of its rainfall.

“From a location department point of view the producers, directors and especially the production designer worked very cleverly with what locations were available to them in Cape Town,” says Currey.

“The usual weather reports had to be followed but 90% of the locations where we filmed were extremely flexible with dates and our key locations were available to the production for the duration of filming.”

South Africa has stood in for ancient Europe in several recent historical dramas including the UK series Tutankhamun and the US show Of Kings and Prophets.