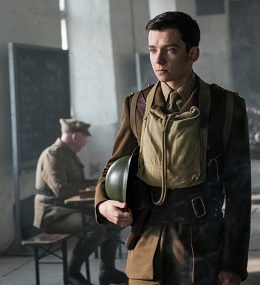 The film is based on a 1928 stage play by RC Sherriff and follows a squad of men with varying battle experience as they take up a posting in the trenches of northern France in 1918 and await a German offensive.

Filmmaker Saul Dibb and his production team made use of a number of existing trench sets over the course of the shoot, including a replica set at Trench Farm near Ipswich that has been used as a location for numerous First World War stories over the years.

“Two days before we started shooting there was an enormous downpour so the mud you see in the film is just the mud we found on set – we didn’t add to it,” says Dibb.

“The actors didn’t go off to trailers. Everyone stayed on set and by the end of it their feet were frozen, they were covered in mud – it was uncomfortable.

Dibb and his team also built a set of their own at Pinewood Studio Wales in Cardiff.

“With the dugout (a protective hole built in the side of a trench), we built it to scale in a studio but we went in and shut the doors,” says Dibb. “It was lit only with candlelight.”

Authenticity was a priority for Dibb and his team. The intimacy of the trench itself was filmed with a compact Alexa Mini camera, while a bulkier Steadicam was used for wider shots. Shell explosions were created on set as practical effects.

“The explosions you see them running towards are in-camera - they’re not visual effects,” says Dibb.

“They are dynamite exploding as close as we were allowed to put it. We did the whole scene in one take (running across No Man’s Land). We ran across with them. Crawling up, getting over, the bombs blasting in front of them, jumping into the trench and soldiers shooting.”

Pinewood Studios Wales offers 70,000 sq ft of shooting space and has hosted TV series including the BBC’s Sherlock and US drama The Bastard Executioner.