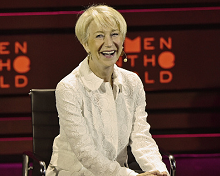 Helen Mirren will play Catherine the Great in a new drama that marks the third commission from Sky and HBO’s high-end production partnership.

The four-part series will examine the reign of the Empress of Russia that lasted from 1762 to 1796.

During her tenure, Catherine was acknowledged as one of the great leaders of her time, reforming and modernising Russia in line with parts of Western Europe.

Catherine the Great will focus on the end of the monarch’s reign and her passionate affair with Russian military leader and nobleman Grigory Potemkin.

The drama is written by Nigel Williams and is a co-production between Origin Pictures and New Pictures. David M Thompson and Charlie Pattinson executive produce for the two companies respectively, alongside Mirren and Philip Martin; the latter will also direct. Jules Hussey produces.

Mirren said of the project: “I am very excited by the possibility of embodying a woman from history who grabbed and then wielded great power. She rewrote the rules of governance by a woman and succeeded to the extent of having the word Great attached to her name - Catherine the Great.”

Origin’s Thompson said: “Helen Mirren came to me with the idea for Catherine the Great when we were working with her on Woman in Gold, saying it's a part she's always wanted to play. I’m delighted we’re now making the series and indeed we can't think of anyone better for the role.

“We’re thrilled with the scripts from Nigel Williams and the drama couldn’t have found a more perfect home than Sky/HBO. We're really pleased to be collaborating with New Pictures on the show, and look forward to bringing it to fruition.”

The first two high-end TV dramas that come under Sky/HBO’s $250m multi-year co-production deal are Sister Pictures’ Chernobyl, that films in Lithuania this spring, and Gangs of London from Pulse Films.