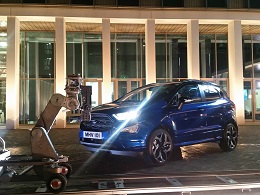 Radical Media has filmed a new commercial campaign for the Ford Eco Sport SUV on location in Scotland.

The 30-second spot plays on the cinematic trait of a hero’s foot stepping purposefully from a vehicle to confront a challenge, but subverts it by having wellington boots, children’s shoes and fluffy slippers among the screen images.

Key locations included central Glasgow for urban scenes, the hills of renowned beauty spot Rest and be Thankful in the Highlands and coastal areas around Crinan Harbour, 95 miles west of Glasgow.

“It was great to be able to put together a nice, talented Scottish crew and to show our American directors (credited as Josh and Xander) the most diverse Scottish landscapes, from urban designs to rolling countryside and rugged terrain,” said Deva Smith, a producer with service company LS Productions.

LS Productions helped the team pick the right locations for the three-day shoot. A Scorpio Arm was used to film the Eco Sport during the Rest and be Thankful leg of the shoot, while a drone captured challenging aerial footage over the coastline.