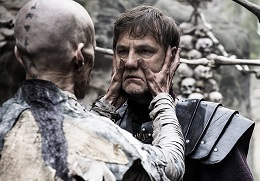 Britannia filmed largely in and around Czech capital Prague, using the country as a stand-in for Britain as it may have appeared around 2,000 years ago.

The drama was also co-produced and serviced by Film United in Prague, a company that has previously worked on contemporary crime drama Crossing Borders, historical series Borgia and the feature film A United Kingdom.

Film United played a key role in bringing Britannia to the Czech Republic.

“Sky’s original intention was to film in Wales and elsewhere in the UK or Ireland but it quickly became clear it couldn’t be done there on the budget they had,” says producer Rick McCallum of Film United, in comments to The Knowledge.

Producers instead spent 22 weeks filming on location near Prague and using set builds at Prague Film Studios and nearby Barrandov Studio. Between them the two facilities offer over a dozen stages and Prague Film Studios plans to offer two more by the spring of 2018.

“The Czech Republic has first-rate crews and can compete on production costs with eastern and central European countries,” says McCallum.

“Budapest may have better incentive support, but a comparison of operational costs and local benefits quickly levels out the two cities. Prague is a nicer place and a city you can walk around, while the stages are closer to the centre and there are hundreds of readily available apartments to accommodate cast and crew.”

The Czech capital commonly doubles for iconic locations across Europe. The city stood in for 17th century Paris in the BBC’s TV version of The Musketeers. More recently, National Geographic’s scripted series Genius doubled locations across the Czech Republic for a multitude of countries to tell the story of iconic physicist Albert Einstein.