War of the Worlds to film in Liverpool 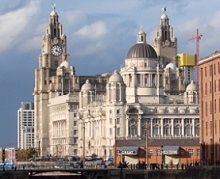 Pre-production is now underway on BBC One’s The War of the Worlds with filming set to take place in Liverpool and Cheshire.

Peter Harness has written the drama with Craig Viveiros directing.

When it was first commissioned, Harness said of the project: “I'm feeling phenomenally lucky to be writing The War of the Worlds and blowing up gigantic swathes of the Home Counties [the book is set in Surrey] at the dawn of the 20th century.

“Wells’ book is ground zero for all modern science fiction and, like all the best sci-fi, manages to sneak in some pretty astonishing comments on what it is to be a human being too.

“I’m hoping to follow in the great man’s footsteps by making a terrifying, Martian-packed series which manages to be emotional, characterful, and - deep breath, dare I say it - even political at the same time.”

Mammoth Screen is busy prepping and developing several projects currently, including Noughts and Crosses, World on Fire and Pride & Prejudice.

Production Intelligence subscribers can log in and follow Mammoth Screen for updates on their forthcoming ventures; non-subscribers can click here to request a free online demo.