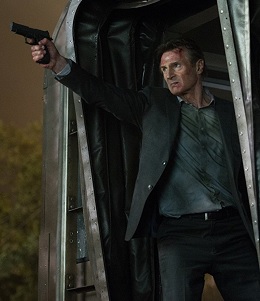 Neeson headlines as a sacked businessman commuting by train across New York State, who gets caught up in a shadowy conspiracy that threatens the lives of everyone on board. It marks Neeson’s and Collet-Serra’s fourth feature together.

“Unsurprisingly, the Metropolitan Transit Authority (in New York) didn’t want us to shoot on their train rails, use any of their equipment or shoot at Grand Central,” says Andrew Rona, a producer on the film. “Everything had to be completely built.”

The production team constructed a 30-tonne train comprising one-and-a-half carriages at Pinewood Studios near London. The set was built with solid walls, windows and doors but used a modular, moveable design so that the director had greater flexibility with where he could place his cameras.

A special camera rig was mounted on rails through the train’s air-conditioning system so that Collet-Serra could shoot smooth, unobtrusive tracking shots throughout the carriages.

“With the dolly hidden in rails in the ceiling and everything controlled by remote, the camera could travel on its own,” says Collet-Serra.

“We had two men controlling the camera: one controlled up and down movement and the other controlled the swinging of the camera arm. That way we had a minimum crew inside the train and the space didn’t become too crowded for the actors.”

A hydraulic ram beneath the ‘carriages’ was used to simulate high-speed movement and objects on seats and tables were rigged to shift every now and then as though responding to kinetic forces.

“It was such an interesting movie to shoot,” says Rona. “We were making a film set in New York on a train, but we’re shooting at Pinewood and Longcross Film Studios in London.

“The train stays in the same place but we move the stations. So it was almost like a theatre production when the backgrounds move in and out. We built the platforms and dressed them so they looked like whichever station it’s meant to be and it’s all happening in the same place. It was a real challenge.”

The Commuter comes just a few months after Kenneth Branagh’s adaptation of Murder on the Orient Express, for which a replica steam locomotive was built as a set, also at the UK’s Longcross Studios. To find out more about the shoot click here.