The Mash Report to return 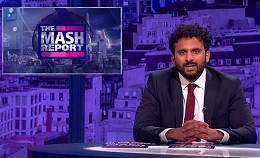 Produced by Princess Productions, the show’s TV format has been developed from satirical website The Daily Mash and features Kumar as the main presenter of comedy news items.

The Mash Report was not a big hit on initial broadcast, but it fulfills the BBC’s desire for programming with a satirical edge.

Production Intelligence subscribers can log in now for details of the show’s scheduled filming dates and studio venue.

“We’re thrilled that the BBC has given us this fantastic opportunity to showcase such a brilliant, diverse range of up-and-coming comedic talent,” said Chris Stott, executive producer at Princess Productions, when the show first secured a series commission.

“There has never been a better time to bring acerbic and topical comedy to the channel.”

A new series of Unspun with Matt Forde, a show commissioned by the Dave network with a similar satirical edge, starts filming a week after The Mash Report and is based at the same studio.