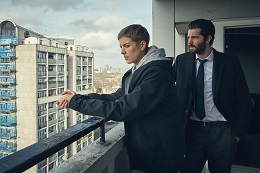 The six-part series is produced by Euston Films and stars Agyness Deyn and Jim Sturgess as a pair of London detectives who discover during a murder investigation that the world will experience an apocalypse in five years.

“This was an extensive shoot between February and April last year, with cast and crew of up to 80 for the most complex scenes,” said Andrew Pavord, director of FilmFixer, which manages many of London’s film offices.

“The incredible hidden Highgate tunnels, connected to the abandoned Highgate Overground station were used. We see a life-or-death chase scene through West Norwood cemetery. Swiss Cottage Library features and the Camden Council office at 5 Pancras Square plays a newspaper office that’s raided by police. Even the real Guy’s at London Bridge was used for hospital scenes – it’s a rare location to see used.”

Euston Films kept crew numbers limited or indeed out of sight to avoid local disruption and the normal practice was followed of making donations to local residents’ associations to help compensate for any inconvenience.

“The cast and crew were regularly reminded to keep the noise down out of respect for residents,” said Pavord, referring to specific action scenes filmed in Camden.

“No sirens were allowed on the fake police cars and all the filming lights had to be switched off at a set time in the evening.”

London remains a popular filming location for both UK and international productions, but producers are becoming more emboldened to showcase parts of the city that are less familiar to audiences.