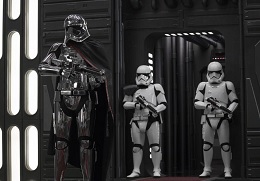 Nearly 130 separate sets were built for Star Wars: The Last Jedi, directed by Rian Johnson, with filming taking place across 14 stages at Pinewood Studios near London.

“The original script had about 160 sets in it – a ridiculous amount,” said Rick Heinrichs, the film’s production designer, in comments to The Hollywood Reporter.

“I didn’t say that to Rian because I figured on something this big he’ll find that out on his own - it’s a 100-day shooting schedule. So there’s more than one set a day you have to prepare for.”

Johnson’s movie is the second in the new trilogy of Star Wars films. Director and producer JJ Abrams launched the rebooted franchise with The Force Awakens two years ago and will also close out the trilogy with the as-yet-untitled Episode IX, which is currently in pre-production.

Filming for The Last Jedi was based at Pinewood Studios, which has become the new home of the Star Wars franchise and has since hosted standalone movie Solo: A Star Wars Story, focussing on the young Han Solo.

Studio work for the new films has involved extensive set building to return to the physicality of the Star Wars universe. Lucasfilm – and indeed Hollywood more broadly – has veered away from the visual effects-heavy aesthetic that came to define the Star Wars prequels of the late 1990s.