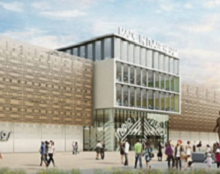 UK studio space is still at a premium in the UK, despite several major expansions and new sites already up and running.

He told the outlet: “I see no evidence that this boom is going to bust. Hollywood studios are making bigger and bigger movies, high-end TV has smashed it in terms of interest and the battle between Apple, Netflix and Amazon has barely begun.There is a torrent of commissions coming from platforms, cable and satellite, broadcasters and networks.

“We created a sweet spot in the UK. We are running to increase capacity and to get more people trained to satisfy the explosion in interest.”

The BFI and Film London are currently putting together a review of capacity for the Department of Culture, Media and Sport.

The BFI’s figures published last month showed that a record-breaking £1.8bn was spent on film production in the first nine months of this year with a whopping £1.1bn coming from inward investment features.

High-end TV drama production has seen a surge of original content commissioned from SVoD giants such as Amazon and Netflix. Combined with the generous tax incentives on offer in the UK and it's easy to see why competition for studio space in the Uk is still a major issue.

Broadcast reports that, according to Film London estimates, between five and 10 major productions were lost to the UK over the past two years due to a lack of large permanent space in the 125,000 sq ft range.

However, in the next couple of years there is due to be a major new 17-acre site in Dagenham (pictured as artist's impression)  while Northern Ireland now has Belfast Harbour Studios fully open and is currently housing major US TV drama Krypton.

Wales now has a major new studio space set up by production company Bad Wolf, while Suffolk is also set to house a dedicated studio on the site of an ex-RAF base.

Wardpark Studios in Scotland, home to Starz' drama Outlander, recently anounced expansion plans but the Scottish government remains under pressure to open a dedicated studio to attract large-scale international productions to the country.