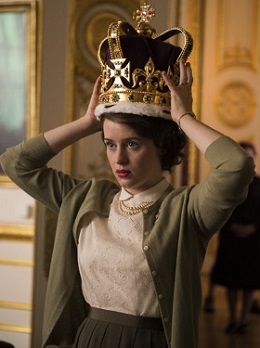 Series Two of Netflix’s TV drama The Crown filmed London locations as settings around the world to tell the story of Queen Elizabeth II from the mid-1950s.

“For this series we saw Suffolk double as Ghana, the HMS Belfast moored in the Thames in Southwark played the Royal Yacht Britannia, Addington Palace in Croydon was Clarence House and some really important scenes turned Victoria House in Bloombsury into the old ITN studios in Kingsway,” said Karen Everett, director of FilmFixer, which manages several London film offices.

Originally built in the late 1930s, HMS Belfast has been permanently moored near Tower Bridge in central London since 1971.

Producers of The Crown used the vessel for a couple of days to film scenes spanning five months in 1956 as Prince Philip toured the Commonwealth on the Britannia without the Queen or their children.

“On the real tour the Prince had 240 men and officers for company,” said Everett.

“For the shoot, he had a rather large cast and crew of 75 over two days.”

Addington Palace in Croydon was used briefly for exteriors of Clarence House, which at the time was home to Princess Margaret and the Queen Mother.

The palace is a well-known film-friendly venue within easy reach of central London that has been used for photo shoots and music videos, and has also appeared in films like Brad Pitt’s war satire War Machine, which used the building as the interior of an Afghan palace.

Filming for the second series of The Crown also took place extensively north of the border, with estates near the Scottish tourist town of Aviemore doubling for the Queen’s Balmoral residence.

The Crown is reportedly budgeted at around £100m for a six-season saga and films largely on location, with several full-size units in production at once.