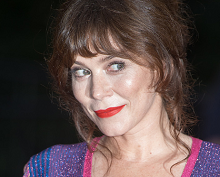 A new drama starring and co-produced by Anna Friel is gearing up to film in early January.

Now in pre-production, Butterfly is a drama about gender identity centring on an 11-year-old boy who decides he wants to live his life as a girl.

Friel plays his mother and co-produces the three-part ITV series that comes from Red Production Company and Aenon.

Production Intelligence subscribers can log in for comprehensive details of the key HoDs attached, including the line producer, production designer, DoP, location manager and casting director.

Red is also busy in production with two other dramas that are both nearing the end of lengthy shoots. Come Home, from writer Dany Brocklehurst and starring Christopher Eccleston and Paula Malcolmson, has been filming in Northern Ireland, while Harlan Coben’s Safe with Michael C Hall and Amanda Abbington, has been shooting on location in Manchester.

The company is also working with Number 9 Films on a TV adaptation of Henry James’ Portrait of a Lady.