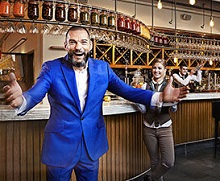 Now in its third year, the scheme helps individuals make the move to the role of series producer within the TV industry.

Supported by the BBC, Channel 4 and Channel 5 via the TV Skills fund, the programme has seen more than 70% of past delegates achieving series producer credits.

"This programme gives individuals the knowledge, skills, support and network to make the move with confidence. It will develop the next generation of creative showrunners who will become the cornerstone of the UK’s world-leading TV industry.”

The scheme runs for one year and will offer: training delivered by industry experts; masterclasses with broadcasters; mentoring by commissioners; ongoing one-to-one support and career advice; networking and access/reduced fees to key industry events.

It is open to new or aspiring series producers who have at least three years’ experience at producer/director level in features, specialist factual, factual entertainment or entertainment TV.

Vari Innes, who participated in the 2017 scheme and went on to series produce Channel 4’s First Dates, described the programme as: “A sanctuary from the non-stop pace of production where you can take stock, get inspired, widen networks, strengthen peer groups and broaden knowledge.”

Applications are encouraged from under-represented groups, particularly those from BAME backgrounds or with a disability and from across the UK.

Applications will close at noon on 8 January 2018. For more details click here.