Justice League filmed in the UK 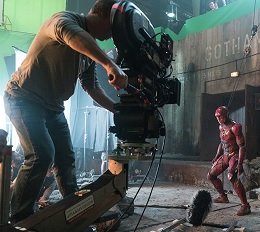 Batman, Wonder Woman, the Flash, Aquaman and Cyborg – plus Superman – come together in a narrative designed to emulate the success of Marvel’s Cinematic Universe.

These settings had previously appeared in Batman v Superman: Dawn of Justice, which was based at Michigan Motion Picture Studios in Detroit. They were recreated in the UK, using precise scans of their original builds in the US.

A production tool dubbed the ‘EnviroCam’ also enabled the team to recreate seamless virtual locations for the UK shoot that had been filmed in America for the previous movie.

“It actually looked like we were in the same place where we shot the original,” says Henry Cavill, who plays Superman. “It was a fantastic experience. It really looked and felt like the Kent farm, only a lot colder since we were in England.”

Accommodation options were limited in the region, so the Justice League team set up a small community of camper vehicles for its 200-strong crew. To get the shots needed for the movie, around 40 cast, crew and filming equipment – including a camera crane – were airlifted by helicopter to a location 1,000 feet above the village.

Iceland is regularly used by high-profile TV and movie productions as a filming location. The country offers expansive wilderness visuals within no more than a 24-hour travel time from Reykjavik and the government boosted the national filming incentive to 25% of eligible spending earlier this year.

Warner Bros and DC have shifted their locations again for their next movie, which focuses on Aquaman, having already wrapped the shoot in Queensland, Australia.