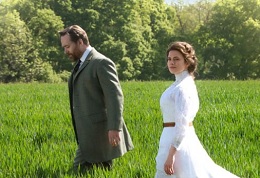 The BBC’s new four-part TV adaptation of EM Forster’s Howards End filmed on location in Surrey and in London.

Set in Edwardian England in the first decade of the 20th century, the story follows the idealistic Schlegel sisters as they meet the conservative Wilcox family and their lives converge at the country home known as Howards End.

A private house in Surrey that was originally built in the 16th century was used as Howards End, while the production team recreated Edwardian London in Islington in the north of the city.

“It was important to find a house on a square that could properly convey a much-loved home of the period, nestled into the capital's ever expanding and changing character. It also had to represent the modern, forward-thinking and socially-minded sisters.

“We looked at many period squares across London and Myddelton Square [in Islington] was eventually chosen based on its good looks and the feasibility of pulling off not one, but the two separate blocks of shooting required to represent both summer and winter.

“We needed an accommodating film office and local council, who could a discuss a myriad of requests from street furniture removal and gate access to road closures and snow and rain effects, while also understanding the ambitious vision we were setting out to achieve.

“The real challenge with period filming is bringing the location back to its original state and we worked hard to achieve this.”

In the end, two thirds of Myddelton Square were dressed to look like 1905 London, complete with horses, carriages and period cars. This in fact had to be done over two separate blocks of filming to accommodate summer and winter scenes.