C4's The Bisexual to film in February 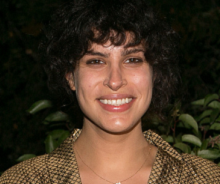 A new Channel 4/Hulu comedy from the producer of Flowers is gearing up to film in early February.

In The Bisexual, Desiree Akhavan (pictured) plays Leila, a New Yorker feeling lost in London who navigates her way through the dating world in a new city.

Akhavan is an Iranian-American film director, producer, screenwriter and actor. Based in New York, she is best known for her 2014 feature film debut Appropriate Behavior.

That film was produced by Cecilia Frugieule, who joins Akhavan as writing partner on The Bisexual.

Executive producer for Sister Pictures, Naomi de Pear, who also produced Channel 4’s Flowers, said: “Desiree has got the kind of sureness of voice as a writer and director that’s rare in its honesty and hilarity.

"The Bisexual will be a shamelessly raw and questioning look at how people are exposed through their sex and relationships, and the new rules, pitfalls and prejudices around that.”

The 6 x 30 will be in pre-production before Christmas, with filming due to begin in February.

Production Intelligence subscribers should follow the project as we will be confirming more key production personnel soon. A line producer is already on board - their name will be on PI once they have finished on their current project.