‘Close Up’ event with Anthony Waye 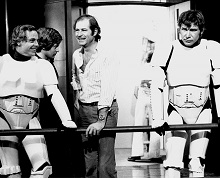 The Production Guild of Great Britain is launching a series of events designed to raise the profile of leading British careers in production.

Held in association with the British Council, the events will feature well-established industry professionals who will take the audience behind the scenes of film and TV drama production.

Launching the run is An Evening with Anthony Waye, which takes place in central London on 15 November.

Waye’s career began more than 60 years ago with roles ranging from mail boy to executive producer.

He has worked on around 70 films, including Elephant Man, Star Wars: Episode IV – A New Hope, 11 Bond films (including Quantum of Solace, Casino Royale, Die Another Day and Octopussy) and two Carry On films.

Alison Small, CEO of The Production Guild of Great Britain, says: “Presenting stories like his to the general public is a key part of our legacy work to share and preserve the history of film production for years to come, giving invaluable insights into this creative business in which the UK excels on a world stage, whilst complementing the BFI’s plans to encourage people with skills and talent to consider a career in film.”

Waye will cover topics ranging from what he looks for in key crew to the ways in which developments in digital technology have affected his role over the years. There will be a Q&A at the end followed by a networking opportunity.

The next event in the series will take place in early 2018.