Murder on the Orient Express filmed in UK 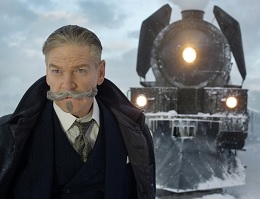 Longcross Studios west of London was the main base of operations for the shoot.

Branagh’s team travelled on the real Orient Express ahead of the shoot to assess the practicalities of shooting on a real train but it quickly became apparent that the logistics were too challenging, especially given that they would be filming with bulkier 65mm cameras.

Rather than shoot on location, they built a 30-tonne locomotive at Longcross, along with two working replicas of the Orient Express herself. One of these sets had moveable walls for added shot flexibility and there were also separate sets of a couple of the story’s key sleeper cabins, again with walls and ceilings that could be easily removed depending on what worked best for camera positioning.

Hydraulics and air bellows mounted beneath the train were used to make the set move in a way that mimicked the movement of a real railway track.

Mountain footage filmed separately in New Zealand was digitally stitched together and provided the background landscapes as visual effect shots, visible whenever the carriage windows were in shot. 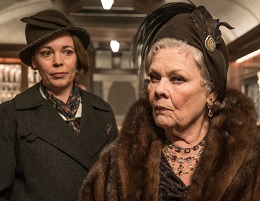 Other sets built at Longcross included Stamboul Station (‘Stamboul’ being an archaic word for ‘Istanbul’, where the train starts its journey in the story) and a huge viaduct where the Orient Express becomes stranded following a snow drift.

The drift came from a mountainside that was built as a 35-foot-high set stretching for several hundred metres in either direction inside Longcross.

Snowfall was a significant dramatic element of the story and the crew faced challenges creating the right ‘types’ to suit the demands of the production.

“Dave Watkins (the film’s special effects supervisor) had to put a lot of work into it, as there were all sorts of different types of falling snow, from powder to snow candles to smoke,” says Matthew Jenkins, one of the film’s executive producers.

“In addition, when we were on the stages he had to devise a way of having snow move past the windows without making any noise, so he built a very complicated ducting system, which filled the stages, to ensure that we could have wind and moving snow passing our carriage windows without anybody hearing that it was going on.”

Longcross offers four stages, the largest of which spans some 42,000 sq ft. Producers also have access to a 200-acre back lot and a test track facility that stretches a little over two miles. In recent years Longcross has hosted Marvel’s superhero movies Thor: The Dark World and Doctor Strange.