Sci-fi drama from makers of The Crown 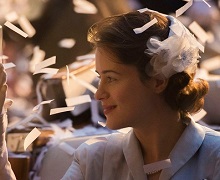 Left Bank Pictures, makers of The Crown, is working on a new sci-fi drama for delivery to subscription service YouTube Red.

Origin is a 10-part series and centres on a group of strangers who find themselves abandoned on a spacecraft heading for a distant planet. It is from Mika Watkins, whose previous TV writing credits include Stan Lee’s Lucky Man and Troy: Fall of a City.

Left Bank is working alongside LA-based Midnight Radio on the co-production, with Andy Harries, Rob Bullock and Suzanne Mackie exec producing for the UK shingle and Josh Appelbaum, André Nemec, Jeff Pinkner and Scott Rosenberg for the US company. Watkins is also on the team of executive producers.

Andy Harries, CEO of Left Bank, said of the commission: “Mika is an exceptional new voice and we are excited to bring her first major project to the screen with our friends at YouTube Red.”

Susanne Daniels, global head of original content, YouTube, added: “Sci-fi and action adventure are huge on YouTube, and our audience will be intrigued by the unexpected plot twists and turns in this bold, studio-quality thriller.”

Filming locations have yet to be confirmed on Origin, but South Africa is thought to be on the shortlist. Left Bank filmed the pilot for Oasis (from the book Strange New Things) in South Africa in September last year and has also used the country for action thriller Strike Back.

Left Bank Pictures has just gone into production on the fourth series of fantasy historical drama Outlander for Starz and is due to begin filming the third series of The Crown for Netflix next year.