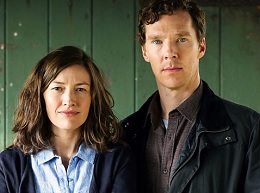 Benedict Cumberbatch filmed on location in Suffolk and London for BBC One drama The Child In Time.

Produced by Cumberbatch’s own company SunnyMarch, the film is the first TV adaptation of an Ian McEwan book.

The story is based on the author’s Whitbread-Award-winning novel about a children’s writer and his wife who lose their four-year-old only child one day in a supermarket.

Scenes depicting the moments immediately after the child’s disappearance were filmed in a real supermarket in Haringey on a Sunday morning a few hours before the shop opened to the public.

“For these highly emotional scenes the production positioned two mounted cameras to capture the action, as well as using one simple Steadicam for close-up shots just outside the Co-op,” says Karen Everett of FilmFixer, which manages the local film office services in Haringey and several of the film’s other locations.

“As Benedict Cumberbatch left the supermarket he walked with the flow of the general public – no pedestrians were stopped for the filming. There was a fake police car and two fake police officers in the background.

“There weren’t any lights on stands, no dolly and track. It was really well organised so that disruption was kept to an absolute minimum and to heighten the tension of the shots.”

Scenes were also shot in Shingle Street, a small hamlet on the Suffolk coast. The location was adapted to the specific needs of the script with the construction of a small railway station and the street façade of a pub. As a rural location, the production team also consulted with Natural England to minimise their local environmental impact.

“In four days the production spent just over £44,000 on local goods and services,” says Everett of the Suffolk leg of the shoot, where film services are provided by Screen Suffolk.

“It’s a shining example of why we must continue working hard to attract big productions into the county.”